While Microsoft is shrinking its OneDrive Storage plans, Google Apps for Work has launched a recommended apps platform and improved its Inbox app, while announcing that more than 2 million businesses now pay for its program, and 3 Million businesses are using the Free edition of GApps for work. Which makes the total of 5 Million Businesses that have gone Google so far! 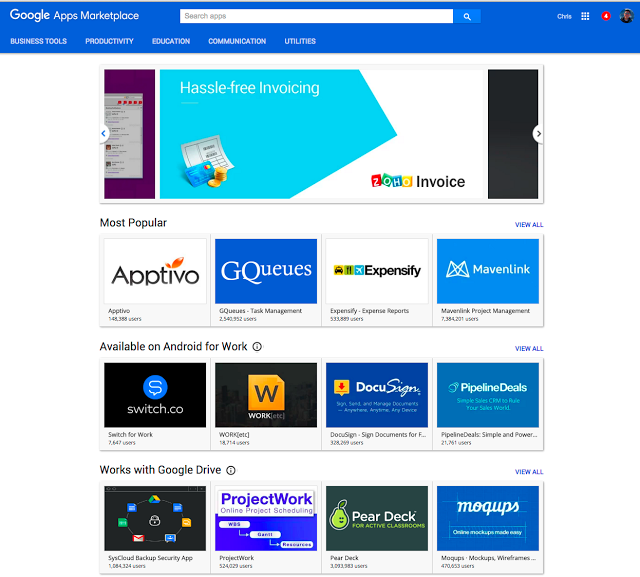 Google opened an online store – Five years ago – called the Google Apps Marketplace to help its business customers find third-party Web apps that complement Google Apps. The software Google is recommending has been reviewed by Google and a third-party auditor for security and ease of integration. Initially Google is singling out eight partners across five application categories:

In addition, Google reorganized its partner program under a new name, the Google for Work and Education Partner Program, to help partners sell services more efficiently to Google’s enterprise and education customers. Plus it partnered up with many organization to improve its Android for Work program.

Google has launched earlier this year a new Email App/Platform, Inbox. Inbox by Gmail is already assisting you with the next step, organizing your trips, and even suggesting reminders. But when you’re schedule is super tight, and the holidays are approaching, you’ll be getting tons of emails. you’ll need help.

Help is on its way with Smart Reply!

Smart Reply is a new feature added to the Inbox app, it suggests up to 3 responses based on the emails you get.

It will take care of the short replies and save you time. And for those emails that require a bit more thought, it gives you a jump start so you can respond right away.

So, how does it work?

Inbox uses machine learning to recognize emails that need responses and to generate the natural language responses on the fly.

If you’re really interested to know about it you can read more on the Google Research Blog.

In addition to this great feature, Inbox gets better now when you report spam, the responses you choose (or don’t choose – they won’t be marked as spam later on) help improve future suggestions.

Smart Reply will be rolling out later this week on both the Apple’s App Store and Android’s Google Play in English (Only for now).