Alphabet Inc, the new holding company for Google, announced that it expects to start delivering its consumer packages by drones in 2017.

David Vos, the leader for Alphabet’s Project Wing, said his company is in talks with the Federal Aviation Administration and other stakeholders about setting up an air traffic control system for drones that would use cellular and Internet technology to coordinate unmanned aerial vehicle flights at altitudes under 500 feet (152 meters).

Amazon.com is one of the companies that intend to make package delivery by drone a reality. But drone deliveries are not expected to take flight until after the FAA publishes final rules for commercial drone operations in the US, which are expected early next year.

Two years after initial research began, Project Wing was announced in August 2014 with a YouTube video showing a field test of its most viable prototype in Australia.

Note that in the US Google was testing Project Wing with NASA. And its becoming a reality in 2017!

Experience interactions not possible on other smartphones. Tilt, auto-scroll, swivel, and peek to navigate menus and access shortcuts with one hand. Dive into a new class of immersive apps and games—peek to see detailed views of clothing, shoes, and more in the new Amazon Shopping app for Fire phone, or take on a character’s viewpoint to see around corners and obstacles in games.

Get free, live, on-device video support with an Amazon expert, 24×7, 365 days a year at the touch of a button. No appointments necessary. Now available over the AT&T cellular network, in addition to Wi-Fi.

A custom-designed sensor system that responds to how you hold, view, and move your phone.

Fire phone comes loaded with a suite of built-in tools and Android apps, with all the apps you want from the Amazon Appstore. For a limited time, Fire phone comes with 1,000 Amazon Coins (a $10 value) for apps, games, and in-app purchases. 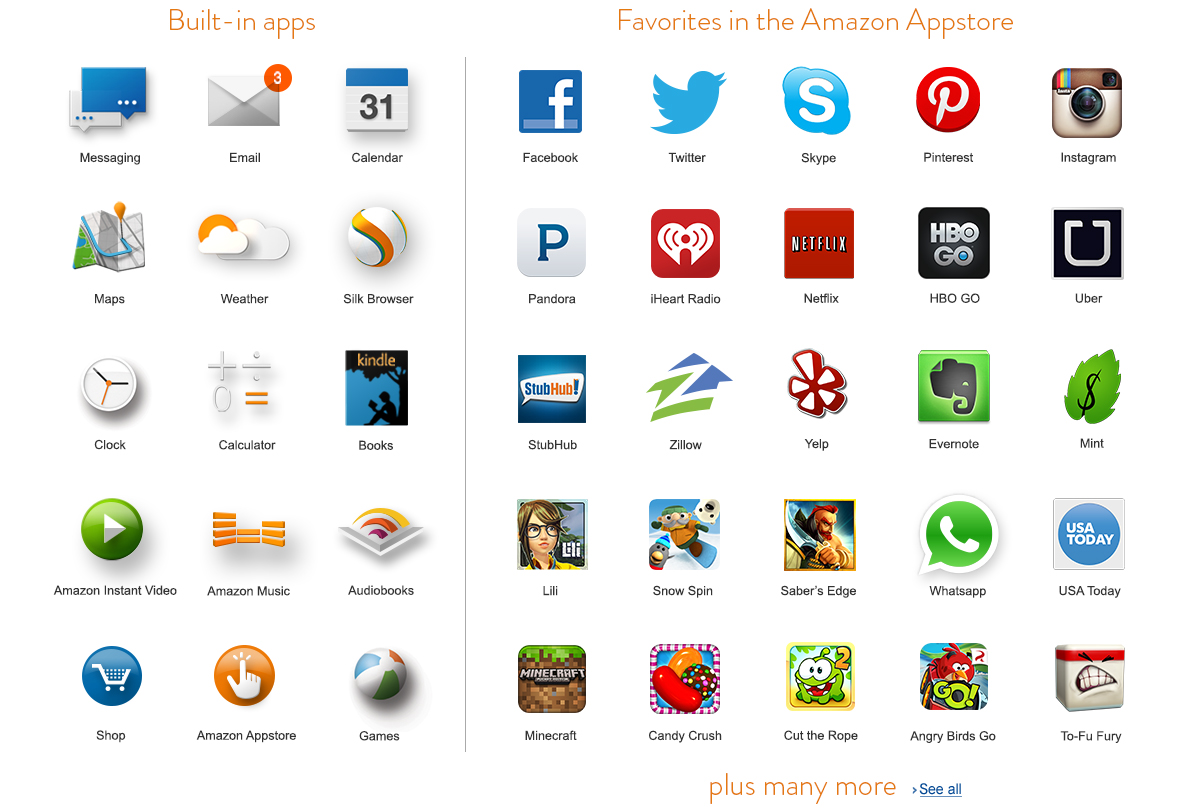 Experience a new class of immersive apps and games that use Dynamic Perspective, Firefly, and the enhanced Home Carousel

Apple’s iPad ranked first in the list with a score of 836 over a total possible score of 1,000 points. The study questioned tablet owners on five categories. These include performance, ease of use, styling and design, features, and cost.

Apple’s iPad scored high on the first four categories. On the other hand, Amazon’s tablets excelled in the cost category, scoring an overall score of 829 points out of 1,000. Other tablet manufacturers such as Samsung, Asus, and Acer followed close behind in the list, though their scores were all below the study average of 828 points.

The results of the study indicate that tablet owners are less likely to add or replace their units anytime soon. Last year, 37 percent of tablet owners stated they intended to purchase a new unit in the coming year. In the 2013 survey only 27 per cent declared they still intended to buy a new tablet within the year.

The research revealed that consumer satisfaction is higher when the tablet unit is a communal device. In the study, sole users scored 28 points lower in satisfaction compared to those who shared a tablet between four or more people. This leads to the suggestion that group satisfaction may have a significant effect on subsequent purchases and brand loyalty.

Boom, just like that Google has issued an update to its excellent Search app for the iPhone and iPad which enables some of the most popular Google Now features on the iOS platform. At least initially, Google Now on iOS devices doesn’t support some of the features Android users have come to love.

All told, 22 of the 29 card types found in Android have made their way to the iOS edition, including weather, traffic, transit schedules and sports scores. Also: Google Now doesn’t have Push Notifications, which makes the feature less useful than on Android, where Google Now can notify users via alerts of their upcoming appointments, changes to their flight schedule, weather and more.

Your promotional video, screenies and additional details are after the break…

The overall look and feel of Google Now on iOS is virtually indistinguishable from its Android counterpart.

However, Google Now on Android is more seamless due to its integration with Google’s mobile operating system, which includes accessing Google Now anywhere with an upward swipe, but also live-updating home and Locks screen widgets which, of course, are not supported on iOS.

According to AllThingsD, we should expect upcoming new Google Now Cards on Android first, “and then see them added to iOS later.”

To refresh your cards, just swipe up. You must be signed in to the Search app with your Google Account to use Now features.

Google Now is about giving you just the right information at just the right time. It can show you the day’s weather as you get dressed in the morning, or alert you that there’s heavy traffic between you and your butterfly-inducing date-so you’d better leave now!

It can also share news updates on a story you’ve been following, remind you to leave for the airport so you can make your flight and much more. There’s no digging required: cards appear at the moment you need them most-and the more you use Google Now, the more you get out of it.

The app icon has also been slightly tweaked.

• get just the right information at just the right time with Google Now.
• weather and traffic conditions before you start your day
• updates on your favorite sports teams and breaking news stories as they happen

That’s a significant difference versus a 38 percent average gain for the top 100 measured web properties and the largest increase in the top ten rankings. It should be noted that the web analytics company now finally includes both hits from desktop as well as mobile devices. Go past the fold for the full breakdown…

By comparison, Google, Yahoo and Microsoft sites lead the top three with sixteen, thirteen and six percent gain, respectively, followed by Facebook (up twenty percent) and Amazon sites (up 27 percent).

comScore’s numbers are platform agnostic. Mobile hits include all smartphone and tablet platforms and desktop includes audience reached via video.

The average property within the Top 100 increased its audience size by an average of 38 percent, and 19 of those properties had incremental mobile audiences that extended the reach of their desktop audiences by at least 50 percent, comScore noted.

Here are the full top 50 rankings.

As you can see, the properties with the greatest incremental percentage gains from mobile were Groupon (223 percent), Zynga (211 percent) and Pandora (183 percent).

We’re always taking any kind of survey or research with a healthy dose of skepticism and so should you. Still, this particular survey highlights key trends and the fact that Apple’s web site is climbing in rankings ahead of, say, CBS is notable in and of itself.