Not to be outdone by Apple’s $799 iPad Pro, which has an ultra high-resolution screen measuring 12.9 inches diagonally and goes on sale next month, rival Samsung is gearing up to launch a brand new tablet with a huge 18.4-inch screen, the Galaxy View.

Although the View is yet to officially launch, some online retailers are now taking pre-orders for the $599 Android device, 9to5Google reported Monday.

Available for pre-order over at Adorama for $599 for an entry-level model with thirty-two gigabytes of built-in flash storage, the Galaxy View is powered by Samsung’s own 1.6 GHz Exynos 7580 octa-core chip with 2GB of RAM, code-named ‘Carmen2’.

On the connectivity front, the device includes Bluetooth 4.1 Low Energy, 802.11 ac Wi-Fi networking and Cat. 6 CA LTE cellular. Built-in storage is expandable up to 128 gigabytes via a micro-SD card.

The front camera is a paltry 2.1-megapixel module with 1080p video capture at thirty frames per second. There’s no LED flash on the front camera and there’s no second camera on the back.

If the promotional images and the device’s moniker are an indication, Samsung is positioning the View as an inexpensive tablet with a massive screen, mostly dedicated to watching video and enjoying media.

Samsung Electronics Co., Ltd., today announced the global launch of the Galaxy Tab S2, the most immersive Samsung tablet to-date. Samsung’s newest Galaxy tablet continuously delivers a stunning Super AMOLED display perfectly optimized for reading and viewing any type of digital content. The Galaxy Tab S2 is stylishly designed with the thinnest and lightest metal frame of its size on the market and packs powerful performance features to offer enhanced usability, empowering users with new and improved choices in productivity and multitasking.

“The Galaxy Tab S2 is not only our thinnest and lightest tablet of its size ever, it also gives users quick, easy access to a wealth of superior viewing and productivity features,” said JK Shin, CEO and President of IT & Mobile Division at Samsung Electronics. “We believe the Samsung Galaxy Tab S2 is the most complete personal visual device designed for consumers to carry and use anywhere.”

At just 5.6mm thin and only 389g (9.7 -inch) and 265g (8.0 -inch) weight*, the Galaxy Tab S2 is perfectly designed for reading and consuming content due to its stunning Super AMOLED Display. By recreating the same viewing experience of browsing through traditional print media, the Galaxy Tab S2 also makes it comfortable to read digital content, including e-books, magazines, webpages and newsfeeds. This reading-optimized ratio allows the user to enjoy a seamless reading experience without unnecessary scrolling.

In addition, the Galaxy Tab S2 continually offers its advanced screen technology to display bright and natural content for a more comfortable visual experience. Adaptive Displayintelligently adjusts gamma, saturation, and sharpness based on the application, the color temperature of the viewing environment and ambient lighting. Also, Reading Mode modifies the screen’s brightness level to help users to read content for longer periods of time without straining their eyes.

Packaged within the world thinnest and lightest metal tablet frame of its size, the Galaxy Tab S2 is portable enough to easily carry around all day. Also, the fashionable and stylish design is suitable for any purpose or setting, so user can enjoy the best viewing experience anywhere, anytime.

Sony didn’t bring a new Xperia Z4 flagship phone on the MWC, but it sure make up for it with the Sony Xperia Z4 Tablet. It’s the company’s new high-end slate, a successor of the Xperia Z2 Tablet.

Sony Xperia Z4 Tablet comes with a 10.1″ IPS display of 2560 x 1600 pixels resolution, which results into a nice pixel density of 300ppi. The display is enhanced by Sony’s Triluminos technology and X-Reality Mobile engine.

The slate is powered by the Qualcomm’s latest and greatest Snapdragon 810 chip, which packs an octa-core 64-bit processor with four Cortex-A57 cores clocked at 2.0GHz and four Cortex-A53 working at 1.5GHz. The GPU in charge of graphics is Adreno 430 and there is 3GB of RAM onboard.

The rest of the Xperia Z4 Tablet specs include 32GB expandable memory, a rear 8MP Sony ExmorRS camera and 5MP wide-angle front selfie snapper, stereo speakers and GSM, 3G and 4G LTE connectivity. The slate is powered by a 6,000 mAh battery and Sony says it will last 17 hours on video playback.

Sony Xperia Z4 Tablet is IP68-certified, which translates in to a dust-tight shell and waterproof design with endurance for up to 30 minutes into 1.5m deep fresh water.

The highlights of the Xperia Z4 Tablet include the elegant design with a metal frame, durable glass and amazingly thin 6.1mm profile. Just like with the Xperia M4 Aqua, the Xperia Z4 Tablet comes with a cap-less microUSB port for easier recharging. The tablet weighs about 395 g and will be available in black and white flavors.

The LTE and Wi-Fi models of Sony Xperia Z4 Tablet are going to hit the shelves worldwide in June this year, but the pricing is yet to be announced.

Sony has also showcased additional accessories, designed exclusively for the Sony Xperia Z4 Tablet. The first one is the Sony BKB50 Bluetooth Keyboard – it’s an all-in-one detachable accessory with adjustable tilt angle (0-130 degrees), complete with a docking station and a full-blown hardware keyboard with a touchpad. The keyboard dock also comes with projector and printer ports.

The second accessory – the Sony SRC32 cover is a flip case that doubles as a stand with two fixed positions. It will be available in both black and white flavors.

Finally, you can opt for the wireless Sony BSP60 smart speaker, which supports one-touch connectivity.

All three accessories will be sold separately, starting June this year.

In something of a repeat of 2012 when the iPad crushed Android tablets in Black Friday mobile revenue, this time around U.S. shoppers used their iPhone, iPod touch and iPad gadgets to racket up a whopping five times the amount of mobile Christmas Day sales as Android devices did, accounting for more than an 83 percent take of mobile-oriented sales compared to Google’s mobile platform.

That’s the gist of yesterday’s survey by IBM providing insights into the nation’s mobile holiday shopping patterns. Read on for the full breakdown…

In terms of the iOS vs. Android comparison, Apple’s platform attracted five times the sales of Android. Specifically, nearly one-quarter of all Christmas Day online sales originated from iOS devices versus a meager 4.6 percent Android share.

If you just look at mobile-oriented sales, iOS was responsible for a commanding 83 percent share. IBM pegged overall online traffic from iOS devices at 32.6 percent versus 14.8 percent for Android.

Tablets were more popular for holiday shopping than smartphones, representing the 19.4 percent vs. 9.3 percent share of online purchases – despite just 18.1 percent of Christmas Day online traffic occurring on tablets (28.5 percent on smartphones).

The average per-tablet sale amounted to $95.61 versus the $85.11 average purchase made from a smartphone. As for platforms other than iOS and Android, Microsoft’s Windows Phone, BlackBerry and others didn’t even blip on IBM’s radar.

I guess this data point will make for a nice slide at one of Apple’s upcoming keynotes. 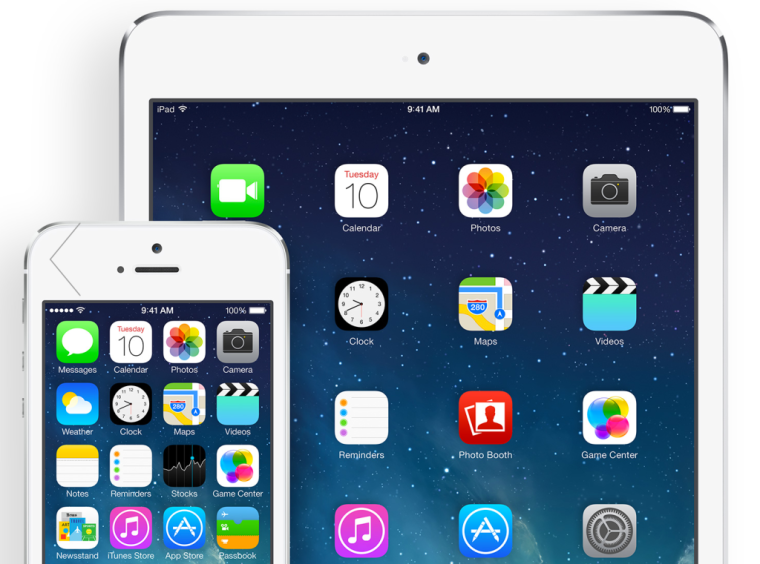 Specifically, the iPad generated 9.8 percent of mobile web traffic to retailers that day, the iPhone registered an 8.7 percent share while Android devices accounted for 5.5 percent of shopping-related Black Friday traffic.

And what platform did you make your holiday purchases on?

Today Samsung has announced the next generation of their sleek Series 9 ultrabook. The two new ultrabooks are called ATIV Book 9 Plus and ATIV Book 9 Lite respectively and both run Windows 8, as you might have guessed.

Both feature aluminium unibodies and 13.3-inch screens with touch functionality. The one on the ATIV Book 9 Plus however packs the whopping 3200 X 1800 QHD+ resolution.

The ATIV Book 9 Plus uses Intel’s fourth gen Haswell CPUs – both Core i5 and i7 ULT are available – and provides up to 12h of battery life. It has 2xUSB 3.0 ports, it weighs only 1.39kg and comes in black.

The ATIV Book 9 Lite takes it easier on the wallet with a screen, which has 1366 x 768px resolution and touch functionality only as an option.

The ATIV Book 9 Lite is powered by a low-voltage quad-core CPU and weighs 1.44kg-1.58kg depending on the touchscreen option. It has one USB 3.0 port and another USB 2.0 port on board. It will be available in both black and white.

There is no info on pricing and availability just yet.

Samsung just unveiled the first interchangeable lens camera that is powered by Android, the Samsung Galaxy NX. The device is a more advanced version of the Galaxy Camera with a much larger sensor and you get a choice of NX mount lenses.

The Galaxy NX uses an APS-C sensor with an effective resolution of 20.3MP. Besides high resolution stills, the camera can also record 1080p video at 25fps. The camera features DRIMe IV Image Signal Processer and can do burst shots at 8.6fps with a maximum shutter speed of up to 1/6000 sec.

The big sensor isn’t the only advantage – with the Galaxy NX you can use any NX mount lens, pancake lenses, fish eye lenses, long primes and zoom lenses, even a 45mm 2D/3D lens. Some lenses feature Optical Image Stabilization too.

The camera packs a powerful xenon popup flash and you get an electronic viewfinder with SVGA resolution (800 x 600) if you are into that sort of thing.

The Samsung Galaxy NX also packs a 4.8″ HD TFT LCD display on the back, which is a lot better than what cameras usually get (yes, even expensive DSLRs). It gets much better functionality too, thanks to Android 4.2.2 with TouchWiz 5, which is becoming standard issue for recent Galaxy devices.

The Samsung Galaxy NX is powered by a 1.6GHz quad-core processor with 2GB of RAM and 16GB of built-in storage. The storage can be expanded with a microSD card (up to 64GB). Connectivity is worthy of a smartphone too with LTE (market dependent), HSPA+ (42Mbps download), Wi-Fi a/b/g/n, Bluetooth 4.0 and GPS plus GLONASS for accurate geo-tagging.

The TouchWiz software means users get the same creative camera modes that we saw on the Galaxy S4 Zoom – more than 30 Smart modes including Animated photo (creates a GIF), Multi Exposure and Sound & shot.

The Galaxy NX will come bundled with Adobe Photoshop Lightroom for advanced image processing, but the camera also comes with True 3D Creator for making 3D images and movies.

There’s no info on the price and availability of the Samsung Galaxy NX just yet.

Starting up with the Samsung ATIV Q, as it is the more interesting slate of the two. It’s built around a 13.3″ display with the jaw-dropping resolution of 3200 x 1800 pixels. This results in pixel density of 275ppi, more than some not-so-old smartphones out there.

Since its a slider tablet, it supports a few lock modes: typing, floating (the display is lifted from the base), stand and writing.

It’s powered by a fourth-gen Intel Core i5 processor with Intel’s HD Graphics 4400 GPU, 4GB of RAM and 128GB SSD storage. It runs Windows 8 and can run Android 4.2.2 Jelly Bean, as well. Connectivity options include one USB 3.0 and USB 2.0 port each, micro HDMI, Ethernet port (via a dongle), and an SD card slot. The front-facing camera is capable of shooting 720p HD video.

On to the Samsung ATIV Tab 3, which sports a 10.1″ display, packing a more modest 1366 x 768 pixels resolution. It runs Windows 8 again but is powered by he Intel ATOM Z2760 CPU and 2GB of RAM. The internal storage is 64GB, expandable via the on-board microSD card slot.

The ATIV Tab 3 weighs 550 grams and is just 8.2mm thick, which Samsung claims is the world’s thinnest as far as Windows 8 tablets go. The company hasn’t provided details about the battery yet, but says it’ll be good for 10 hours of usage. There’s one microUSB and one microHDMI port as well.

Sharing the design of the Galaxy Tab series, the ATIV Tab 3 also features an improved S Pen, which is fully compatible with the Microsoft Office suite, which is preloaded on it (Home & Student version).