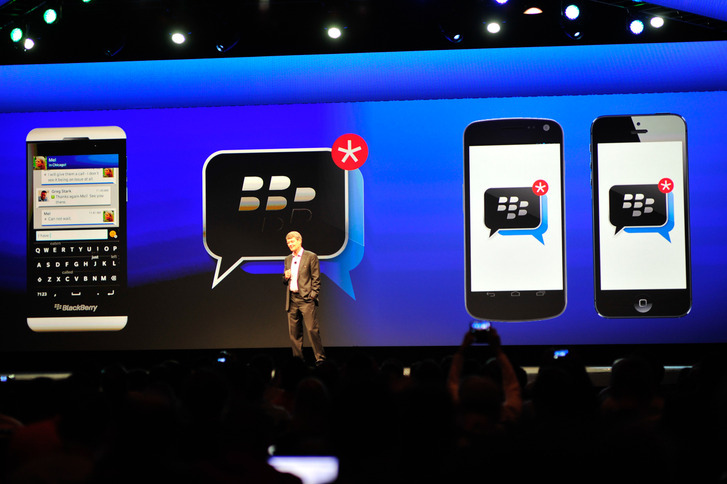 BlackBerry’s BBM messaging service is finally coming to Android and iOS. The long-rumoured release of BBM on handsets other than BlackBerry’s own was announced by CEO Thorsten Heins on stage at the BlackBerry Live conference in Orlando, Florida

“We are making the BBM platform more powerful than ever. We want to offer this powerful mobile service to everyone,” said Heins.

Any iPhone running iOS 6 or later will be able to download BBM. Android handsets need to be using Ice Cream Sandwich or Jelly Bean in order for BBM to work. BBM will also be free on both iPhone and Android.

“We are committed to making BBM on other platforms as fully featured as we can,” explained Heins, who was keen to emphasise that the messaging service would still be best on BlackBerry’s own handsets.

“Of course BBM on blackberry will be the premier experience,” said Heins. “It’s a statement of confidence.”

The CEO explained that the company was so confident with BlackBerry 10’s success that it wasn’t worried about sharing its premier draw, BBM, with other operating systems.

The rollout will begin in the summer with BBM in its most basic form. Messaging and groups will be available on Android and iOS, with video and screen sharing coming later in the year. The just announced BBM Channels should also arrive in 2013.

The Blackberry Q5 revolves around a 3.1-inch touchscreen and one of BlackBerry’s classic physical QWERTY keyboards, which they are so proud of. The screen has an unusual resolution of 720 x 720px – the same as on the Q10, but this time it’s an LCD unit. Inside the BlackBerry Q5 there’s a dual-core 1.2Ghz CPU and 8 gigs worth of storage. There’s a microSD slot to expand that, but the battery is not removable.

The new BlackBerry Q5 will be available in selected markets in Europe, the Middle East, Africa, Asia (including the Asia Pacific region), and Latin America, with availability beginning in July. The smartphone will be offered in black, white, red and pink.

Another announcement that came from the today’s keynote is that the BlackBerry 10.1 update is now ready to seed to the BlackBerry Z10 (later this month in the US). Not only that, but starting today, Skype will be available to all users who update their Z10s to v10.1.