High above the Las Vegas Strip, BMW’s CES setup looks innocent enough: a pair of small i3s and a smattering of various other BMW models parked off in the distance of a parking garage rooftop. In reality, the company was about to freak me out.

First, I got a glimpse of a collision avoidance system using an array of fairly well-concealed external sensors on one of the i3s. BMW set up a bunch of big, soft blocks dressed to look like walls and other hazards — it was a little Super Mario-esque, come to think of it — and told me to punch the gas in their direction.

That’s a tough command to process, and it took me a second to work up the courage. Tentatively, I approached the first couple of blocks in the car; I got so close that I was sure I’d touch them, but at the last moment, I heard a soft “beep” and felt a moderate application of the brakes that stopped me with probably no more than an inch to spare (BMW is quick to note that the sensors they’re using are next-gen and very accurate — these aren’t the ultrasonic parking sensors you see on today’s bumpers). 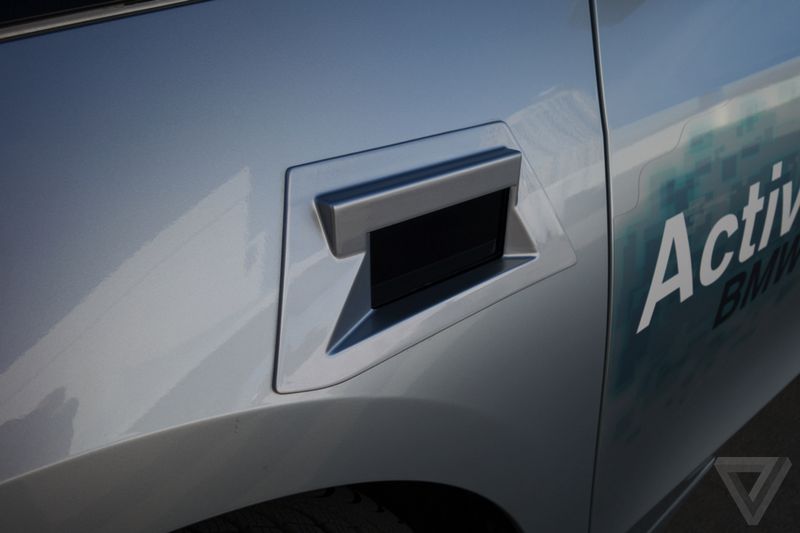 The system works in reverse, too, and on the sides — I tried turning too sharply at a corner in such a way that a normal car would’ve taken a huge, expensive gash across the doors. This i3, though, with its enhanced instincts of self-preservation, slowed to a halt before it could take any damage. The system is designed to still permit you to park in a tight spot without getting in the way; I tried parallel parking with no issue.

Next, I tried the company’s automatic valet system in another i3, which uses basically the same set of high-definition sensors to map the environment around the car. We’ve seen a variety of self-parking systems from automakers at CES over the years, but this one seemed to be the most polished: it doesn’t require any special equipment or beacons in the parking garage, it’ll just autonomously find a spot to park without anyone in the vehicle. It’s initiated using an app that BMW has designed for Samsung’s Gear S smartwatch, where you can see the status of your car (charge level, for instance) and tap a command to go park. Slowly — like, really slowly, 5 mph or so — the i3 lurched forward on its own, seeking out an open space. It rounded a corner where the other BMWs were parked, found a slot next to an M4 convertible, and eased its way in.

The app can summon the car, too. I rode alone in the passenger seat for this leg of the journey, which was really eerie — there are no words to describe the feeling of sitting by yourself in a car that’s slowly moving and turning on its own. You can tell it’s designed to be super careful: it moves no faster than brisk walking pace and has the same anti-collision sensors I’d just experienced in another heart-pounding demo. Still, you’re at the mercy of a computer, which is hard to get over. 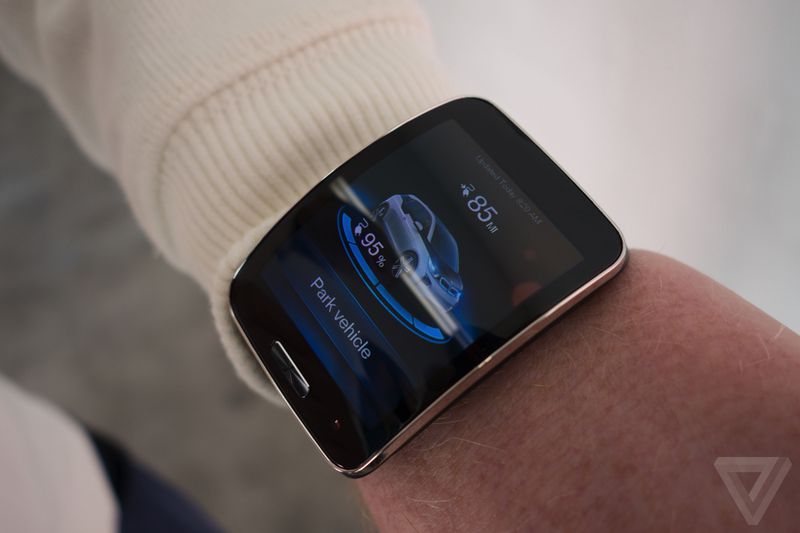 I returned to the anti-collision demo one last time, where BMW staff encouraged me to be way more aggressive. So I was: I drove the i3 like I’d stolen it, but I couldn’t get it to hit anything no matter how hard I tried. Any steering angle, any gas pedal input, the car just didn’t care. It’s an additional margin of safety that I’m guessing will eliminate a lot of expensive fender benders in a few years.

Both of these systems are basically branches of the same R&D effort happening inside the company — autonomous driving, which BMW still believes is a few years away. The sensors required for this level of accuracy still need to get smaller and easier to integrate into the car’s bodywork. It’s encouraging, though: if a car is tuned into its environment well enough to consistently stop a driver from bumping into things, it can probably stop itself when there’s no one in the driver’s seat.

When you first arrive to Bassoul-Heneine’s location (BMW local Dealer), the M Spirit welcomes you with the beautiful M stripes design on the glass covering the building.

You enter the showroom to find the gorgeous 4 Series, 420i Coupe and 420i Cabrio in front!

Now take a look at all the models!

And that’s pretty much it folks! You can visit BMW Fascination Days and:
1. Discover and test drive the new wide range of BMW models
2. Benefit from very special offers on selected models.
3. Live the German experience

The current-generation BMW 6-Series was all-new for the 2012 model year, so we’ll soon see the vehicle undergo its mid-cycle update. Today, we have the first spy shots of prototypes for the updated 6-Series coupe, which we expect to be revealed early next year, as a 2016 model.

Being a mid-cycle update, the changes to the car are minimal. However, we should see the changes appear across the 6-Series range, which means we should be seeing prototypes for updated versions of the 6-Series Convertible, 6-Series Gran Coupe and M6 models, too.

The camouflage gear on the prototypes suggests we’ll see new bumpers, new fender vents and revised lights. Changes are expected in the cabin as well, with the updated 6-Series likely to adopt BMW’s touchpad interface already found on some of the automaker’s vehicles.

It’s not clear yet what changes will occur under the hood, but it’s likely the current powertrain lineup will carry over with only minor tweaks. It’s also likely we’ll see some new electronic driver aids added to the car.

A robotic parking system recently debuted at the Dusseldorf Airport in Germany, and while it’s not the first automated parking system to see the light of day, it is among the first to prioritize elegance and design. Most robot parking solutions have thus-far been rather warehouse-like, made with big yellow and blue steel girders and large, visible mechanical parts. Your average BMW owner would probably be much more likely to trust Billy the valet with his brand new paint job, whether or not that’s a justified view. Big, moving pneumatic platforms tend to have a dour, steam-ejection aesthetic, and people don’t generally like watching their $100,000 car get shunted around like boxes at an Amazon factory — but what about a slick, friendly robot named Ray? That’s a solution that could capture the lucrative luxury market.

The user experience on Ray is seamless — just park your car in Ray’s little area, pay for parking, and walk away. The system performs a 3D scan of the vehicle, and Ray adjusts its tines and tires to perfectly slide beneath each car and lift it by the tires. When holding a car aloft, Ray does not take up much more space than the car itself, allowing the system to pack vehicles densely without blocking anything off. You don’t need to remember where you parked, because you won’t be going there anyway; Ray will retrieve your car and bring it to the pickup area when you’re ready to leave. In many cases, this means the system will have your car waiting for you when you walk out of the terminal, since your flight schedule is logged with the airport.

Check out the video below for some shots of Ray in action.

The creators at Serva Transport Systems, which created the system, say that Ray can pack up to 60% more cars into the same parking area. That’s an impressive claim, and not a difficult one to believe if you’ve ever tried to navigate a large, chaotic parking garage. Not only does Ray pack cars more closely together, but it can plan elaborate and efficient layouts no collection of human drivers, or even valets, would put up with.

Of course, there are downsides to Ray — such as the fact that, right now, getting a robot to park your car will cost you almost $40. If you’re choosing Ray over a human valet service though, that might not be such an enormous fee, as tips and valet fees are often quite hefty themselves. Many people are more comfortable ordering machines around than people, and getting more drivers to use parking services (human or robot) should increase efficiency. Additionally, Ray is fully insured against any damage it might cause to a car, so drivers needn’t worry about too much about hypothetical hiccups in the self-driving software.

Ray can also only lift cars just high enough to move them, which means it can’t do any multi-level stacking of automobiles. Ray can dramatically increase parking density in a given area, but it can’t take advantage of any vertical space — though it could theoretically drive cars up and down ramps between floors of a parking garage. The incredible Volkswagen autopark system at Autostadt Wolfsburg (which you can see below) certainly marries the aesthetic and technological sides of robot parking quite effectively, though the costs are prohibitive; one of Ray’s biggest advantages is that it can go to work in virtually any parking area with minimal need to retrofit.

Right now, people are paying for novelty and to subsidize a nascent industry, but costs should come down soon enough. When they do, high-traffic facilities all over the world may find that buying a few automatic parking robots is cheaper, easier, and more readily embraced by the public than building 60% more parking area.