Porsche is out with two new Cayennes, and like every model in its stable, there has to be at least a half-dozen variants. Minimum. So it’s time to meet the Turbo-wannabe GTS and its base sibling, that – gasp! – no longer has a manual option.

There’s not too much new with the base model, with the 3.6-liter V6 – shared across the VAG line-up – still chugging along with 300 horsepower, and huffing and puffing to hit 60 MPH in 7.7 seconds (7.6 with the optional Sport Chrono pack). But for 2015, Porsche is dropping the manual option in favor of the eight-speed Tiptronic S automatic, because we’re assuming the take-rate on the stick was -1 percent.

The new GTS is slightly more compelling, ditching the V8 found in the last model with the twin-turbocharged 3.6-liter V6 putting out 440 horsepower and 443 pound-feet of torque. Porsche claims a 0-60 run of 5.2 seconds (nix a tenth for the Sport Chrono), and a top speed of 163 MPH.

The standard kit includes a sports exhaust, Turbo-repping air intakes and lighting, and flared wheel arches. The suspension has been lowered by 20mm and dropped over 20-inch “RS Spyder” wheels framing the Turbo’s larger 390mm front discs. It looks good until you get to the interior, which comes across as bit gauche with its red piping and GTS logo stitched into the headrests.

Porsche has expanded into the compact sports-utility vehicle market by introducing the macan, adopting the DNA of the ’918 spyder’, the company’s first hybrid super car. the top-of-the-line ‘S’ model boasts a 400 horsepower 3.6-litre V6 bi-turbo engine, which when paired with active all-wheel drive and a seven-speed double-clutch transmission, catapults the sports SUV from 0 to 100 km/h in 4.8 seconds. making its debut at the 2013 los angeles auto show, the ‘macan’ positions itself just below the cayenne, offering a high level of comfort and versatility with performance numbers comparable to the likes of the porsche 911 carrera.

For its facade, the macan bases its headlight and tail light design off the 918 spyder, which features compact three-dimensional LED technology. inside, the SUV position the driver as if they were inside a sports car; the cockpit integrates a multi-function sports steering wheel equipped with paddle shifters and is outfitted with premium leather sports seats.

Porsche has expanded into the compact SUV market by introducing the macan, adopting the DNA of the ’918 spyder’

This is kind of interesting. Following a press release this weekend, Volkswagen has just unveiled the ‘iBeetle’ at the Shanghai Motor Show in the city’s Pudong district. The vehicle is expected to launch early next year, and will come in both coupe and convertible models.

Why is it called the iBeetle? The car will feature a custom built-in iPhone docking station, as well as a companion app, that will allow you to sync your iPhone with its entertainment system for making phone calls, streaming music and more. More details after the fold…

Volkswagen claims that this is the first time a vehicle has featured a “genuine integrative interface for the iPhone that was coordinated with Apple.” And in addition to the app and dock, the iBeetle will also feature Chrome trim, and custom ‘Disc’ wheels and badging. 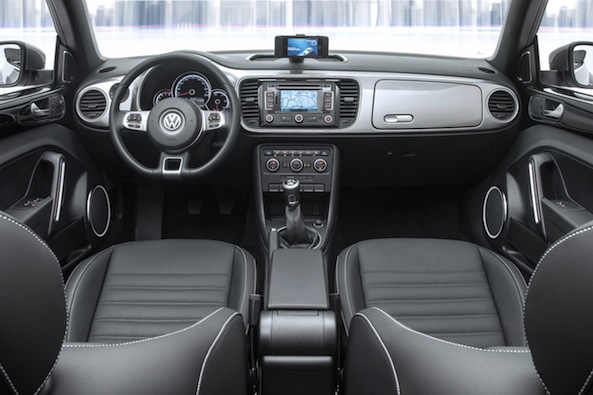 Here’s some of the car’s capabilities noted in Volkswagen’s press release (via AutoBlog):

The newly designed docking station is located centrally on the dashboard of the Beetle: the iPhone simply snaps in to integrate it with the car. Essentially, all iPhone functions can be used in the Beetle; the iPhone can be used to navigate, make calls hands-free, listen to music, and much more.

When this special app is launched on an iPhone, it can either connect the phone to the Beetle via the docking station or wirelessly. Each option allows for different app functions to be accessed:

Spotify: lets users stream media such as new songs, customized playlists or online radio stations into the Beetle. Those who wish can post their favorite music directly to friends. In addition, users in the Beetle can switch between “Spotify” and “iTunes” at any time.

Expert: offers five functions which make the iPhone an extended on-board instrument of the Beetle, such as a G-Meter (for measuring lateral acceleration), oil and coolant temperature gauges for the engine, a chronometer, and a compass.

Trainer: can be used to compare driving times, distances, and fuel economy values for different routes between any two destinations. Here, too, tips can be posted via social networks like Twitter and Facebook-such as which route is faster to the office.

Postcard: Sends the current location of the Beetle to friends as a digital postcard with a map motif.

Photo: Sends photos taken inside the car to numerous social networks. Simply activate it, and the app does the rest.

Milestones: Available when the smartphone is undocked. Rewards its users with virtual “milestone stickers” for the Beetle when certain tasks have been completed.

We’ve heard several reports recently that Apple is looking to wade further into the auto space. Last month, word got out that the iPad-maker was going to broaden its partnership with Ferrari. And shortly after that, it was seen hiring engineers for its vehicle integration team.

Apple is also making a big push in the auto space right now with its new Siri Eyes Freeproject. The feature, which was introduced in iOS 6 last year, allows users to initiate Siri through their car’s factory entertainment system. It made its debut earlier this year in the Chevy Spark.

The company’s growing infatuation with in-car integration should surprise no one. Steve Jobs often dreamed of building an ‘iCar,’ and even went so far as to discuss the idea with Volkswagen years ago. And Apple has factory iPhone and iPod adapters in most makes and models.

But what is surprising is that VW thought an iPhone dock (oh yeah, and an iPhone application) was worth building an entire car around. It seems like something that would have just been available as an option, or listed as a bullet point in a ‘technology’ trim package.

At any rate, the iBeetle will be available in iPhone-like ‘Candy White’ and ‘Black Monochrome,’ among other special colors. And should be ready for purchase in early 2014.

Aside from the car being “design driven” and “electrically powered,” Cadillac did not reveal many details about the coupe. According to Autoblog, however, the ELR was tested with the same range-extended electric drive system as the Chevy Volt.

GM also provided a single, shadowy image of the coupe, revealing a vehicle that looks similar to Cadillac’s Converj Concept, which the company unveiled last year.