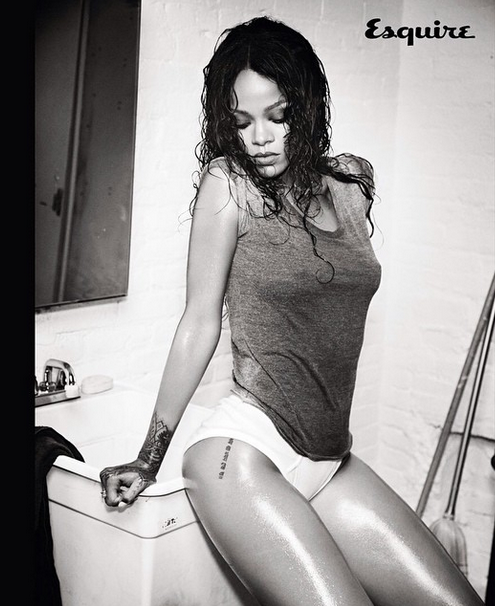 When Rihanna arrived back on Instagram this weekend, I was actually astounded time didn’t stop or a parade wasn’t immediately held in her honor (#rude). Despite this super disrespectful lack of public fanfare, badgalriri has been uploading photos left and right, from birthday parties, to her sick Halloween costume, to a sneak peak at her upcoming December cover for Elle magazine, which the mag described as “boldly stripped down.”

Well, it seems she’s also stripping down (way, way down) for the December cover of UKEsquire‘s ‘Food & Drink’ themed issue, and to say the spread is amazing would pretty much be the understatement of the century.

She uploaded a few other pictures from the spread, which was shot by famed fashion photog Ellen von Unwerth, and full disclosure—you might need a super strong fan or some ice water to get through the rest of it. Rihanna SLAYS. 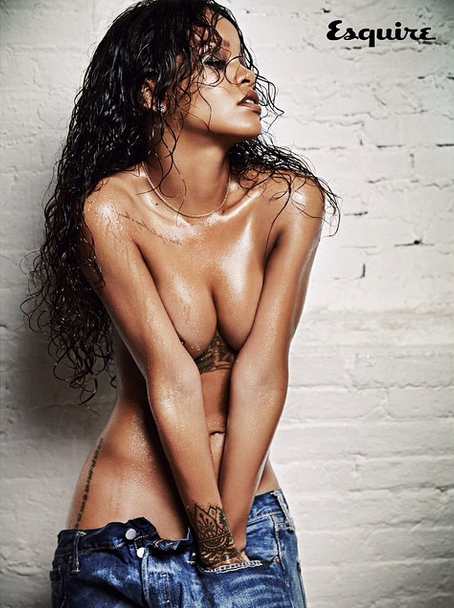 Black and white pictures + a shower hose – clothing = Rihanna’s best spread eva, IMHO. If she was looking for a way to truly ring in the return of her reign over Instagram, these pictures straight up nailed it. Bless you, Rih-Rih, BLESS YOU. 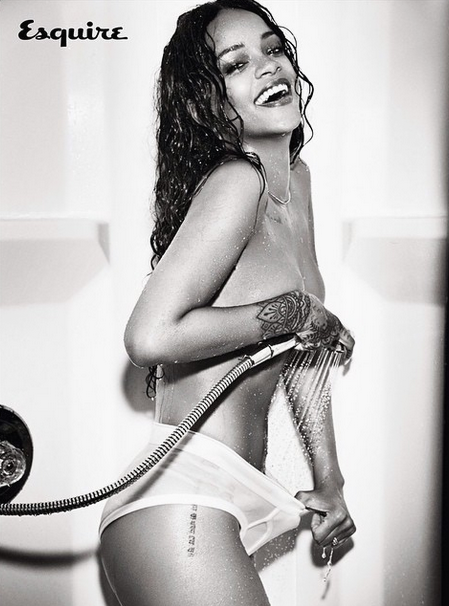 Surprise! Rihanna’s not just topless, but she’s bottomless too.

OK fine, maybe we’re exaggerating just a little, because Rihanna’s technically wearing a fur headdress and a bra. But does an article from the “intimates” section of a department store even count as actual clothing? NO IT DOES NOT. Also, we never thought we’d say this, but we’re starting to get a smidge bored of all these Rihanna naked photos, because, lets face it, they happen EVERY SINGLE DAY OF OUR LIVES. In recent months, Rihanna’s been naked in the pages of GQ, naked on the cover of GQ, naked with Kate Moss on the cover of V magazine, naked after Halloween, and naked several billion other times after that. Now, in the the latest addition to our ever-growing “Rihanna’s not wearing any clothes again!” photo album, the “Nobody’s Business” singer was photographed topless (well, in a bra) and — brace yourselves — bottomless. Now that’s a curve ball we did NOT expect.

Sent into to the world via Rihanna’s pal Melissa Forde’s Twitter account, the post included a NSFW “philosophical” caption that we truly hope helped keep Rihanna warm during the shoot. (Because it tends to get a little cold when you’re wearing 0.0 clothes.)

OK Ri, we know you’re a GORGEOUS powerful woman, and that gorgeous powerful women should celebrate their bodies at all times, but it’s SERIOUSLY DECEMBER RIGHT NOW. We’re glad you at least thought to wear a hat (’cause you lose most of your body heat through your head), but we’re also betting that you lose plenty of body heat through your butt. Just something to think about.

Guys, we didn’t think it was possible for Rihanna to get even MORE naked than when she wore ONLY a leather jacket on the cover of GQ, but, rest assured, she did. And this time in the actual pages of GQ. In a BIG way. Did we mention there’s more than one picture? Specifically, there are a whopping five brand-new, basically naked pictures of Rihanna to drool over. Welp, it’s a great day for the Rihanna navy, and that’s all we’ll say.

In addition to dropping trou within GQ’s December issue, just the past few weeks alone Rihanna has already posed basically nake-o with Kate Moss on the cover V Magazine, pranced around in her skivvies at the Victoria’s Secret Fashion Show, tweeted a photo of her as a topless marijuana bride after Halloween, and finally, rocked a skimpy nude bikini to celebrate the completion of her forthcoming Unapologetic disc.

Inside the issue, Rihanna discusses things like that one time she almost got a face tattoo (OMG), the kind of music she hopes to create, and even touches on the infamous Chris Brown/Drake brawl. On the (almost) face tattoo debacle of 2012, Rihanna confesses: “The tattoo artist said nope, I’m not gonna do it,” she says, “because if you’re looking at your face, it’s right there staring at you.” GREAT CALL. On the type of music she hopes to create, Rihanna explains: “I want to make music that’s hopeful, uplifting. Nothing corny or super sentimental. I just want it to have the feeling that brings you out of whatever you’re going through. I want it to spark that fire. I want it to be real, authentic, and raw.” We feel you, bb! Wanna know what else is real, authentic, and raw? Returning to your natural state and not wearing any clothes. Way to keep things consistent.

Duchess of Cambridge Kate Middleton’s topless photographs are going to be published by a French magazine, a move that comes close on the heels of her brother-in-law Prince Harry’s naked photo scandal.

The Duke and Duchess of Cambridge are said to be “saddened” by claims made by a French magazine that it will publish topless photographs of Kate Middleton, reported The Sun.

The photographs were taken last week while she was sunbathing by a swimming pool with her husband Prince William at a chateau in Provence, France. They were at Chateau d’Autet in Luberon, a secluded, picturesque hunting lodge.

Closer magazine has posted a pixelated version online showing Kate in a bikini and William in a pair of shorts.

Underneath it said: “See incredible pictures of the future Queen of England as you’ve never seen her… and as you will never see her again!”

The magazine’s editor Laurence Pieau was quoted as saying that the pictures showed Kate “fully topless”.

“Harry is going to feel a lot less alone.”

The snaps are said to show William and Kate, both 30, rubbing sun cream on their bodies by the pool, The Sun reported.

The blurb of the magazine said: “Kate was perfecting her tan. And to avoid streaky tan marks, she took off her bathing suit.”

Just last month, the royal family was hit by the scandal of photographs that showed a naked Prince Harry.

Prince Harry had become naked after a game of strip billiards, hugged a naked woman, and showed his bare bottom to the camera while spending a raucous holiday in Las Vegas.