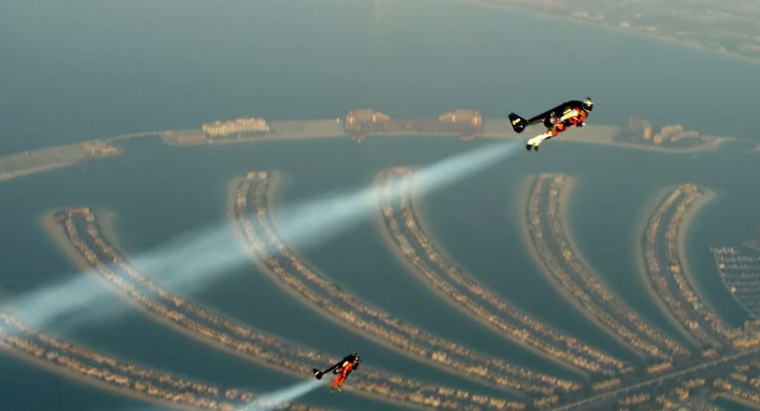 Yves Rossy and Vince Reffet, the two innovators behind the Jetman Dubai jetpack athlete team, have released an incredible video of their synchronized jetpack flight high above Dubai and the surrounding desert.

Rossy, a fearless professional pilot from Switzerland, is a leading innovator in the field of propelled human flight, having created his own custom jetpack after years of experimentation and customization. This flight represents the experience that he and his protege, Reffet, have gathered during years of practice.

The jetpack Rossy designed is the closest that mankind has comes to the jetpacks that we’ve all seen in sci-fi media like The Rocketeer. They need the assistance of another aircraft to take flight, but can gain altitude and sustain flight for anywhere from 6 to 13 minutes at speeds between 180 and 300 km/h.

Some retailers believe that it’s important to make their stores easy to find. They’ll even pay a premium for space in popular malls or streets with lots of foot traffic.

Sony is taking a different approach with its Xperia Aquatech Store, one that definitely does not value convenience and spits on the concept of foot traffic. For one thing, it’s underwater. For another, you have to scuba to get there. On top of that, you have to be invited.

This is a marketing gimmick to drive home the point that Sony makes waterproof devices, but it’s an admirably over-the-top (or, I guess, under-the-sea?) approach.

The Xperia Aquatech concept store is only open 4 meters underwater in Dubai for three days, and even if you’re a PADI-certified divemaster, you need to be a contest winner, VIP, or otherwise Sony-approved patron before you can enter the ridiculous jellyfish-themed underwater structure.

Sony provided scuba training and dive instructor guides to help people reach the store, along with this boat. They also provided waterproof cases for people who owned an Xperia Z3 phone, because they are only waterproof up to 1.5 meters for fresh water. 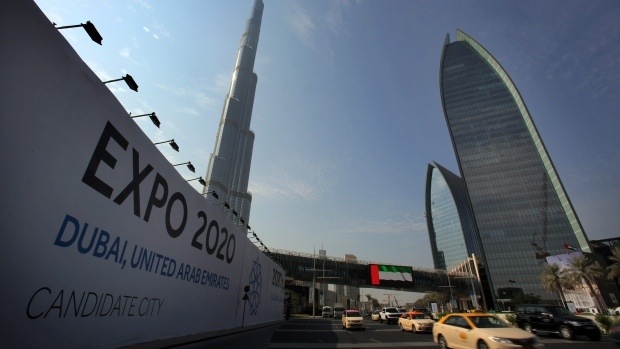 Fireworks erupted in Dubai after the tiny Gulf emirate won the right to host the 2020 World Expo, becoming the first Middle Eastern city to organize the event in its more than 150-year history.
Dubai bested competing bids from Izmir, Turkey; Sao Paulo, Brazil; and Yekaterinburg, Russia, after three rounds of voting by delegates of the 168-nation Bureau International des Expositions in Paris.

In line with its reputation of over-the-top glitz and glamor, Dubai lit the world’s tallest tower with glimmering lights. The skies around the Burj Khalifa, which towers at 2,717 feet, erupted with fireworks.

United Arab Emirates Minister of Foreign Affairs Sheik Abdullah bin Zayed addresses reporters after Dubai was selected to host the 2020 World Expo, at the OECD in Paris, Wednesday Nov. 27, 2013(AP Photo/Remy de la Mauviniere)
The official Twitter account for Dubai’s world expo bid wrote after the announcement that the win “will help unlock the vast potential of this region” and that it is the first World Expo to be held in the Middle East.

“The UAE is proud to have been selected to host #Expo2020 in #Dubai under the theme ‘Connecting Minds, Creating the Future’,” said Dubai authorities on their official expo bid account.
Dubai authorities expect Expo 2020 will generate $23 billion between 2015 and 2021, and estimate it will cost $8.4 billion to organize.

The announcement comes just days before the Dec. 2 U.A.E. national day, which celebrates the young nation’s 42 years of unity and independence from the British Protectorate.
While the World’s Fair no longer holds the popularity of other global events like the Olympics or World Cup, it remains a chance for millions from around the world to discuss and see the business of the future.

Delegates voted behind closed doors over three rounds to choose the winner. Sao Paulo and Izmir were eliminated in the first two rounds, leaving Yekaterinburg and Dubai to face off in the decisive third round.
Last year Yeosu, South Korea, hosted the 2012 world expo. The next one is scheduled to take place in Milan in 2015.

Jennifer Lopez wished Lebanon a happy independence day in her own way by wearing the Lebanese flag during her concert in Dubai last night.