Abdo Feghali has inherited the 23rd Cedars Rally victory after Roger Feghali got disqualified for receiving help from Joe Kfoury when the former went off in the early stages of the rally.

Roger, who dominated the event yesterday by winning 10 out of a total 12 super special stages, went off course on the third super special stage in Sereel and is claimed to have resumed the rally thanks to help from Joe Kfoury, who also got disqualified.

The Ford Fiesta R5 driver has appealed the decision and is looking to take his victory back. In the meantime, Abdo Feghali is the tentative 23rd Cedars Rally winner, followed by Eddy Abou Karam in second place overall and Rodrigue Rahi in third.

Roger Feghali took his third straight victory of the 2014 Lebanese Rally Championship season after dominating the 23rd Cedars Rally today despite an early setback that saw him lose a bit of time to his competitors.

Roger’s rally got off to a bad start when he went off track in the opening special stage in Aarjes, and dropped back behind Abdo Feghali, Nicolas Amiouni and Eddy Abou Karam. The Ford Fiesta R5 driver, however, struck back in the second special stage to go second fastest behind Abdo (Evo X), before raising his game even further to win all remaining 10 special stages. 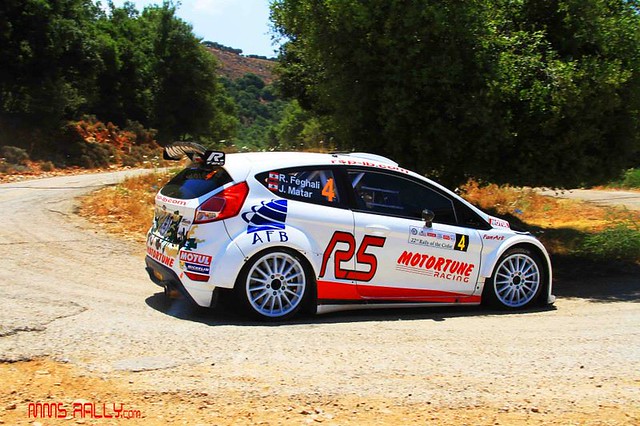 Abdo Feghali drove a consistent rally to finish second overall and first in the Group N class, followed by Eddy Abou Karam who had his hands full in a battle for third place with Nicolas Amiouni, before the latter slowed down on the second loop of stages due to a broken component in his Evo X. Amiouni eventually crossed the finish line in fifth place overall behind Rodrigue Rahi’s Lancer Evo IX.