Apple has acknowledged the recent terrorism attacks in Paris with a commemorative ribbon on the Apple France homepage, www.apple.com/fr. The black ribbon is a sign of remembrance and mourning; Google has also added the symbol to its homepage in response to the attacks.

In addition, Apple has been contacting affected employees in French Apple retail stores to check they are safe. 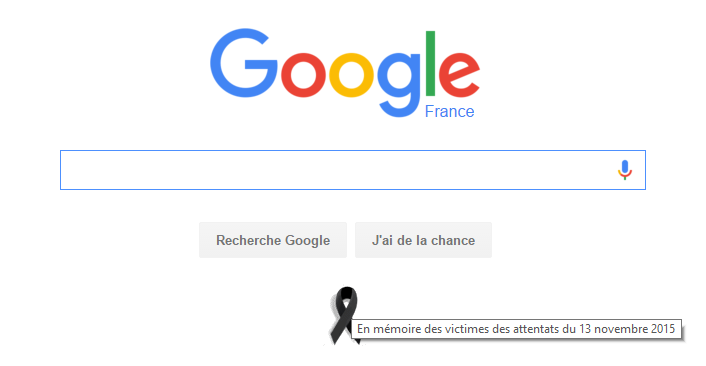 Google has made calls to France via its Hangouts service temporarily free. Callers can use the Hangouts app on Android, iOS, and the web to place calls to the country without incurring the normal international charges. The Google+ post making the announcement did not specify any particular countries, so presumably free calls are available from any location where Hangouts can be used. It’s not clear if Google Voice users are also being given free calls.

Note that Skype has joined the team also with free calls to France. 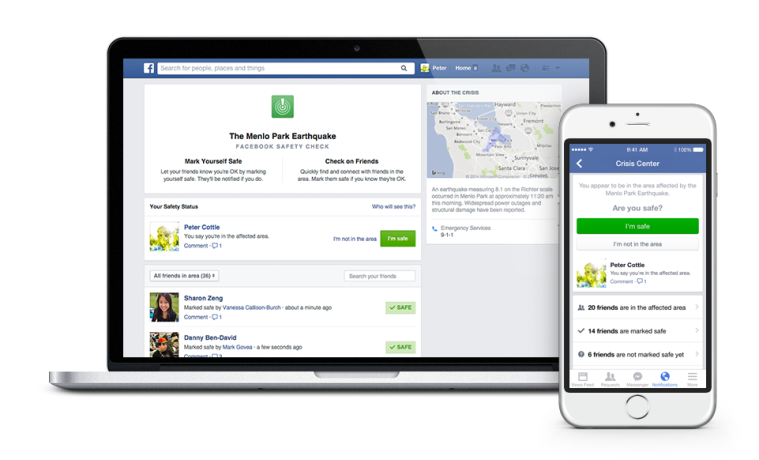 In the immediate aftermath of the Paris attacks on Friday, many with loved ones living in the city received a new type of notification from Facebook. The social network activated a relatively new tool called Safety Check for the attacks, letting people in Paris easily tell their friends and that they were safe.
While the feature has been helpful for many, some pointed to its use in Paris but not for other recent attacks — like a twin suicide bombing that killed over 40 in Beiruit on Thursday — as yet another example of western bias that apparently values certain lives more than others.

On Saturday, Facebook saw fit to respond to those accusations in a blog post written by the company’s vice president of growth, Alex Schultz. In it, Schultz notes that this is the first time the company has enabled Safety Check for anything other than a natural disaster, events which the tool was originally designed for when it was released last year.

Like a natural disaster, he notes, during the attacks “Facebook became a place where people were sharing information and looking to understand the condition of their loved ones.” After discussing with Facebook employees on the ground, the company decided it was a good idea to turn on Safety Check. “There has to be a first time for trying something new, even in complex and sensitive times, and for us that was Paris.”

Now that Facebook has set a precedent for using Safety Check for terrorism and other violent events, it will need to figure out when and where to use the feature. From Schultz’s comments, it’s not clear if the team would have enabled it for Beruit. He includes the Lebanese city among “other parts of the world, where violence is more common and terrible things happen with distressing frequency. ” And he notes that “During an ongoing crisis, like war or epidemic, Safety Check in its current form is not that useful for people: because there isn’t a clear start or end point and, unfortunately, it’s impossible to know when someone is truly ‘safe.'”

That said, Schultz writes that “We want this tool to be available whenever and wherever it can help,” adding, “We will learn a lot from feedback on this launch.”

Teenage Mutant Ninja Turtles opened to No. 1 in 17 out of its 19 markets this weekend — including in big market bows of Mexico and Russia — to take in $28.7M on 2,771 half shells. In Mexico, it grossed $6.9M from 653 locales, which bested last weekend’s opening of Guardians of the Galaxy which took in $6.5M. In Russian, it opened to $11.1M or 13% ahead of Dawn of the Planet of the Apesand nearly doubling the No. 2 pic in the marketplace — Guardians of the Galaxy in its second weekend out of the gate. Paramount can also boast that its Transformers: Age of Extinction has become the 9th highest-grossing film of all time with a total to date of $789.3M after pulling in another $17.4M in 58 territories. (It’s in 5,229 location).

And what about Guardians? It’s has now grossed over $313M worldwide since bowing last weekend, bouyed by an estimated take of around $176M after this weekend domestically. It took in $40.1M this weekend in over 50 markets but has yet to bow in some big territories, namely China, Spain, France, Germany, Italy and Japan. So it’s still rockin’ and rollin’ around the globe with Russia and the UK becoming its strongest territories so far with $23.9M and $22.8M, respectively. In Russia, it has already run over Captain America: The Winter Soldier, the firstCaptain, Thor 1 and Iron Man (the first one) — no small feat. And in Australia it bowed to No. 1 to bring in $6M and, so with previews has culled together a strong $8.2M. It’ll open in France and Spain next weekend and won’t hit China until Oct. 10.

The Hundred-Foot Journey (from DreamWorks/Participant Media) opened in India and we are awaiting word on that from Reliance Media as they are handling international on it.

Step Up All In, currently playing in 37 markets, bowed in Germany this weekend and was the only major territory to debut day and date with the U.S. The dance film, which is the fifth film in the popular international franchise, is handled in the U.S. by Lionsgate now and overseas by LGF’s Summit. It has so far made $37.7M after adding another $6.4M this weekend. In Germany, it debuted to $2.6M on 430 screens for a strong $6,046 per screen in this territory. Overall, its strongest territory has been France where it has tallied a total of $6.7M to date.

Meanwhile, Lucy – which crossed the $100 million mark worldwide with an estimated $97.4M take in the states and $15M from 15 market around the globe. The ww cume is $112.4M after three weeks in release with 44 territories yet to go as it continues its international run through next month. Besson’s EuropaCorpis handling the film in France where it experienced the best opening day ever for director Luc Besson.

Germany booked its place in the World Cup semifinals for a record fourth time in a row after defeating France 1-0 in Rio de Janeiro on Friday.

Mats Hummels headed the only goal of the game after 12 minutes to secure victory for the Germans in a scrappy last-eight contest.

France, beaten by West Germany in the 1982 and 1986 semifinals, came closest to equalizing when Mathieu Valbuena brought a fine save out of Manuel Neuer.

“Seven players have somehow come down with slight cases of the flu,” Loew was quoted tellingGermany’s ARD radio. He said that most had “throat aches” but did not reveal their names.

“As a result, it’s too early to make any final decisions about the line-up,” Loew added.

Defender Mats Hummels missed Germany’s round of 16 match against Algeria on Monday due to a fever. He said on Wednesday he had recovered and posted a picture of himself sitting on the beach.

Reserve midfielder Christoph Kramer was suffering from a case of the chills on Wednesday and was the only player who did not take part in the training session, said assistant coach Andreas Koepke, who added all other players were fit and ready to travel to Rio de Janeiro for Friday’s match

Loew has said that the travel across Brazil and different climate zones for their four matches so far as well as matches in tropical heat, a heavy downpour and then in chilly Porto Alegre – along with air conditioning – had taken their toll.

He added: “It’s not all that bad at the moment. I don’t want to dramatise it.”

But Loew said that Hummels’ condition had actually deteriorated.

Loew has come under heavy fire in Germany for his decision to put captain Philipp Lahm in midfield instead of at right-back, where he has excelled for years. Loew was forced to put Lahm at right-back late in the Algeria match due to injuries.