This recent press image leaked by evleaks seems to put the Nokia X name into concrete. The device was code-named Normandy thus far and appears a low-end Android device bound for the Asha lineup next month.

Nokia would desperately need to win over developers if their Android phone is to succeed. Rumors so far have it that the phone is based on the Android source code but it won’t have any of Google’s services built in. This means there is no Play Store, so Nokia must create its own application repository. Nokia will also be substituting Google’s services for its own HERE Maps location services and Microsoft’s Bing, Outlook and Skype.

We last heard that a dev-version of the Nokia X is already being shipped to devs in India.

Apple CEO Tim Cook appeared at D11 on Tuesday night and gave an explanation why Apple doesn’t release more than one variation of the Apple iPhone each year. On the other hand, the executive seemed to open the door a little, to the idea that more than one version of the phone could be launched at the same time.

Nonetheless, we suggest that you grab your salt shaker and take with a grain of salt the report from those all-knowing industry sources in Taiwan. These guys are saying that Apple will be launching not one, but two Apple iPhone models in the third quarter of this year.

The phones could be launched as early as next month and will include “a revised version” of the Apple iPhone 5 (which would probably be called the Apple iPhone 5S) and a low cost model of the device. The latter would have hardware specs similar to the Apple iPhone 4S, but with a lower resolution screen and a less powerful processor.

Shipments of the new Apple iPhones are expected to peak in August and September after starting at the end of June. All together, 100 million to 120 million units of all iPhone models are forecast by these industry sources to ship in the second half of 2013. If Apple is indeed this close to launching two new versions of the iPhone, we are surprised by the lack of any leaked photographs of either or both devices. No one has left a prototype in a bar for some time, although it did happen to the Google Nexus 4 last year.

And with that segue to Android, the same report says that Korean OEM Samsung could be looking at aJuly-August launch for the Samsung Galaxy Note 3. Considering that Samsung’s J.K. Shin has stated that the phablet would not be introduced until September’s IFA show in Berlin, we would tell you to start shaking that salt. The Samsung Galaxy Note 3 is rumored to have a 13MP rear-facing snapper with OIS support. There is also speculation that Samsung has reduced its target of shipping 70-80 million smartphones in the current quarter although it might hit the higher figure by the end of the next quarter 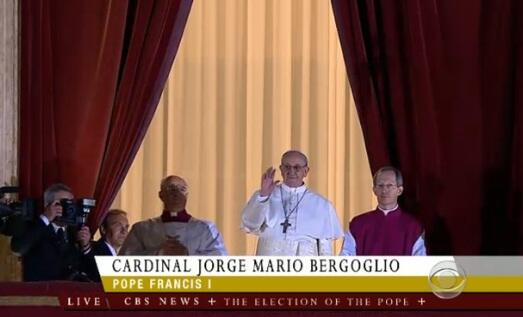 VATICAN CITY: White smoke poured from the roof of the Sistine Chapel on Wednesday and the bells of St. Peter’s Basilica pealed, signalling that cardinals had chosen a new pope to lead the troubled Roman Catholic Church after only five ballots.

The decision by 115 cardinal electors came sooner than many faithful expected because of the large number of possible frontrunners identified before the vote to replace Pope Benedict, who resigned in February.

The name of the new leader of the world’s 1.2 billion Roman Catholics was expected to be announced in around half an hour from the central balcony of St. Peter’s Basilica.

The secret conclave began on Tuesday night with a first ballot in the Renaissance splendour of the chapel and four ballots were held on Wednesday. The white smoke indicated the new pontiff had obtained the required two thirds majority in the fifth ballot.

Following a split ballot when they were first shut away amid the chapel’s Renaissance splendour on Tuesday evening, the cardinal electors held a first full day of deliberations on Wednesday. Black smoke rose after the morning session to signal no decision.

Cheers arose from hundreds of people sheltering from incessant rain under a sea of umbrellas in St. Peter’s Square as the white smoke billowed from the narrow chimney.

The cardinals had faced a tough task in finding a leader capable of overcoming crises caused by priestly child abuse and a leak of secret papal documents that uncovered corruption and rivalry inside the Church government or Curia.

The wave of problems are thought to have contributed to Pope Benedict’s decision to become the first pontiff in 600 years to resign.

The last four popes were all elected within two or three days.

Seven ballots have been required on average over the last nine conclaves. Benedict was clear frontrunner in 2005 and elected after only four ballots.

The cardinals were shut inside for the secret election under Michelangelo’s luminous frescos on Tuesday after a day of religious pomp and prayer to prepare for the task.

The initial inconclusive vote about two hours later was seen as a way of filtering the choice down to frontrunners for discussions among the supporters of the various candidates.

No hint emerged before the pope was chosen. The Vatican had taken precautions, including electronic jamming devices, to prevent any leaks from inside the conclave.

The new pope will take up a burden that Benedict declared in February was beyond his physical capabilities.

Apart from an child abuse scandals and the “Vatileaks” case, the Church has been shaken by rivalry from other churches, the advance of secularism, especially in its European heartland, and problems in the running the Vatican bank.

The former head of the Archdiocese of Los Angeles, Cardinal Roger Mahony, is attending the conclave despite calls for him to stay away because of a sex abuse case that led to his censure by his successor Archbishop Jose Gomez in January. He was stripped of all public and administrative duties as punishment.

On Tuesday, lawyers for the victims in four sex abuse cases said the diocese, Mahony and an ex-priest had agreed to pay nearly $10 million to settle. Mahony was accused of helping a confessed paedophile priest escape prosecution.

Frontrunners at the conclave included Brazilian Odilo Scherer – who would be the first non-European pope since Syrian-born Gregory III, nearly 1,300 years ago – and Italy’s Angelo Scola, who would return the papacy to traditional Italian hands after 35 years of the German Benedict XVI and Polish John Paul II.

In preparatory meetings before the conclave, the cardinals seemed divided between those who believe the new pontiff must be a strong manager to get the dysfunctional bureaucracy under control and others who are looking more for a proven pastoral figure to revitalise their faith across the globe.

Milan Archbishop Scola, who has managed two big Italian dioceses without being part of the Vatican’s central administration, could be well-placed to understand the Curia’s Byzantine politics and introduce swift reform.

Scherer is said to be the Curia’s favoured candidate and would satisfy those who want a non-European, reflecting the future of a Church shifting towards the developing world.

A host of other candidates from numerous nations have also been mentioned as potential popes – including U.S. cardinals Timothy Dolan and Sean O’Malley, Canada’s Marc Ouellet and Argentina’s Leonardo Sandri.

All the prelates meeting in the Sistine Chapel were appointed by either Benedict XVI or John Paul II, and the next pontiff will almost certainly pursue their fierce defence of traditional moral teachings.

Google’s October 29 event has reportedly been cancelled after a state of emergency has been issued in the US due to the imminent arrival of Hurricane Sandy, which will be passing through New York City, Google’s venue for the event.

The event has likely been postponed to a later date although we are yet to hear when exactly it will be taking place. Meanwhile, Microsoft’s Windows Phone 8 event in San Francisco is still on track, so we still have something to look forward to.

Will sex robots be the future of prostitution within decades?

A pair of New Zealand researchers say yes, finding that robot prostitutes are already being conceptualized and could “revolutionize” the sex tourism business by 2050.

The reasoning is simple: Safer and less complicated!

THE REAL DEAL: Ashley Dupre has nothing to do with this story. She’s just hot, and was once a real prostitute. Sex robots have their work cut out for them.

The researchers envision an imaginary sex club in Amsterdam called Yub-Yum, where sex tourists pay 10,000 euros ($13,191) for massage, lap dances and straight sex acts from these lifelike sex robots strutting around the club.

Sexually transmitted diseases and infections would be non-existent because the sex robots would be made of bacteria-resistant fiber that would be flushed of human fluids after the sex acts. You may vomit (or get turned on) on cue.

While the New Zealand study is bad news for prostitutes, who would soon join the ranks of the unemployed, Dennis Hof, owner of the Moonlite Bunny Ranch, a legalized brothel near Las Vegas, scoffed at the findings.

Nothing beats the real thing, he says.

“Those Australian researchers ought to come to the Bunny Ranch to see what real American sex is like – there’s no duplicating it,” Hof told CBS Las Vegas.

“At the Bunny Ranch, we say ‘it’s not just the sex, it’s an adventure’ – and often times it’s more about the adventure than it is the sex itself.”

This is true … although robots could presumably be adventurous, wouldn’t that just be a little weird?