The Argentina and Barcelona has done it for the FIFTH time. What a machine!

The iconic player says: “Good evening again. It’s a very special moment for me to be back, here on this stage, winning another Ballon d’Or, after being there in the audience winning Ronaldo win it two years in a row. It’s incredible. My fifth. It’s more than anything I dreamed of as a kid. I want to thank my team-mates, without them none of this would have been possible. I want to thank football in general – for the bad and the good.“

Luis Enrique is the best Coach.

Cristiano Ronaldo has been asked to pick one quality he’d like from Lionel Messi – and he’s given an honest answer.
The Real Madrid star, along with his Barcelona rivals Messi and Neymar, was speaking at the Ballon d’Or pre-award show press conference on Monday where the Argentine is heavily expected to win the trophy for the fifth time in his career.

Both Messi and Ronaldo were asked which quality they would take from each other, and the Portugal international admitted: “Yes, his left foot his really good, I would like to have that!”

“What Cristiano has is lots of quality, lots of good things that every player would like as well,” said the Barcelona forward.

“But I am the way I am, and he is the way he is. We each have individual personalities and we have both very good things that everybody should have as footballers.”

Neymar was a bit more humble and admitted he would like to have feet from both Messi and Ronaldo.

Luiz Felipe Scolari apologised to the people of Brazil after they were humiliated 7-1 in the World Cup semi-final by Germany.

Scolari, who insists he will not resign after this shameful defeat, said: ‘My message is, to the Brazilian people and fans, that we did and we tried to do what we could.

‘Please excuse us for this mistake. I’m sorry we couldn’t get to the final. This is a catastrophe.

‘It’s probably the worst moment of my career. This is the worst day of my life, but life goes on.

‘I’ll be remembered probably because I lost 7-1, the worst defeat Brazil have ever had, but that was a risk I knew I was running when I accepted this position. Life goes on. That’s what I’ll do.

‘We did what we thought was our best, and we lost to a great team that had the team, in six or seven minutes, to end the game with three or four goals in extraordinary manner.

‘I can tell you that, after the first goal, we had a problem and, with the skills of a team who have been working together for a long time, they capitalised on it.

‘We will continue working and honouring what our team means for the third place match in Brasilia. ‘I’d like to thank the supporters for supporting the players despite us losing by five, six, seven. It was interesting to see that happen.’

Brazil star Neymar speaks to the nation promising they “we’ll be World cup champions” despite him being unable to continue in the competition due to breaking a vertebra during the Colombia-Brazil quarter final.

In a video message Brazil’s star player told the nation not to stop dreaming because they could still win the World Cup, despite him being unable to play due to a broken vertebra.

Neymar was ruled out of the World Cup with a broken bone in his back sustained in the 2-1 quarter-final win over Colombia on Friday.

In an emotional message to the public Neymar said that his dream “was not over yet”.

“Rest assured that my teams mates will do everything for me to fulfil my dream to be champion.

“My dream was also to play in a world cup final this time it will not be possible, but rest assured that they will win this one and Brazil will be champions.” 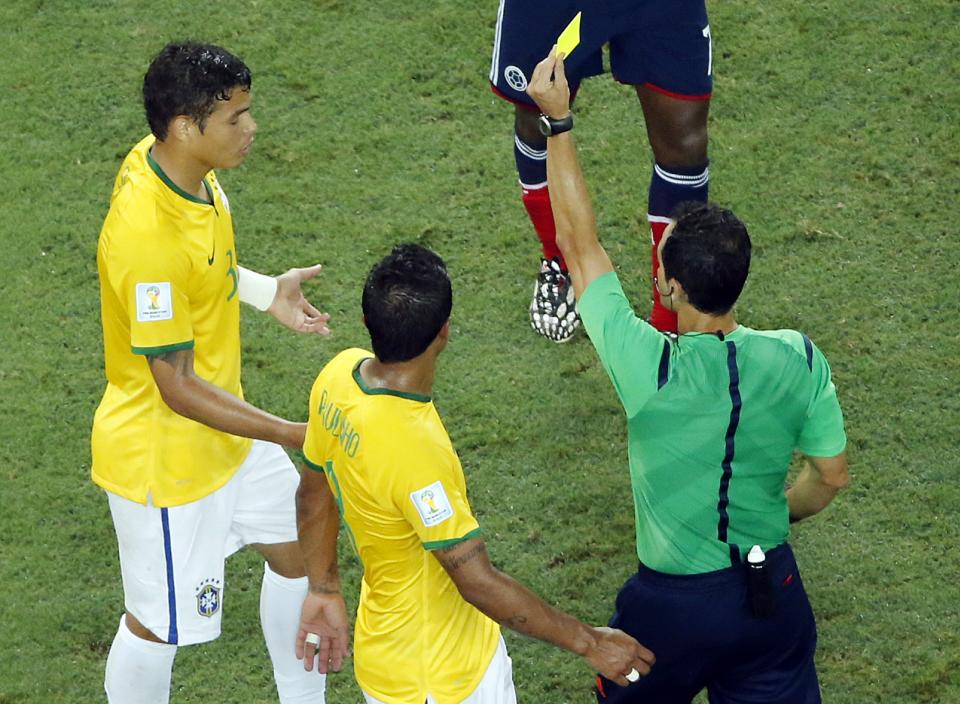 Thiago Silva impeded Colombia goalkeeper David Ospina’s attempt to kick the ball downfield during Brazil’s 2-1 quarterfinal win over Colombia, picking up his second yellow card of the tournament and incurring an automatic suspension for the next match.

The FIFA disciplinary code states that cautions can be canceled only in ”exceptional circumstances.”

At the 1962 World Cup, Brazil star Garrincha was sent off in the semifinals victory against host Chile, then was cleared to play in the final. Brazil beat Czechoslovakia 3-1.

Now, no player can be suspended for the final just for receiving a yellow card in the semifinals.

Brazil’s bid to win a sixth World Cup has suffered a devastating blow after Neymar was ruled out of the rest of the tournament after fracturing a bone in his back during the quarter-final victory against Colombia.

The Barcelona striker was taken off the pitch on a stretcher after taking a knee to the back from the Colombia defender Juan Zuniga late in the game.

He was taken to a private clinic in Fortaleza – “crying out in pain”, according to the Brazil manager, Luiz Felipe Scolari, – where an X-ray revealed he had fractured one of his vertebrae.

Rodrigo Lasmar, the Brazil team doctor, said: “This news is not easy but he will not be available for the rest of the World Cup. Neymar has a broken vertebra. He will be out for four to six weeks.”

Zuniga defended the challenge, claiming he did not deliberately try to hurt Brazil’s talisman.

“It was a normal move” he said. “I never meant to hurt a player. I was on the field, playing for the shirt from my country, not without the intent to injure. I was just defending my shirt.”

Thiago Silva and David Luiz had scored the goals to set up a semi-final against Germany in Belo Horizonte on Tuesday, but Neymar’s injury represents a grievous setback given his importance to the team and the absence of a ready-made replacement. He has been one of the stars of the tournament and a player the Brazil public regard as their best hope of victory.

Brazil will also have to do without Thiago Silva against Germany, ruled out after his second yellow card of the tournament, but it is the news about Neymar that will raise the most doubts about whether Scolari’s team have enough quality to go all the way.

Scolari had earlier held a press conference in which he ruled Neymar out of the Germany game but acknowledged that the news might be even worse.

“I don’t know,” he said to the question of how he could replace Neymar. “I’m going to have to study this. It depends how people recover. Neymar has gone to a clinic.

“He was crying out in pain and I can guarantee it’s going to be hard for him, from what the doctors are telling me, and from what I was seeing, with the pain he was in. He’s young, he has a lot of energy and he takes cares of himself. So let’s see. Let’s just hope it’s not a serious problem.”

Unfortunately for Brazil, the scan revealed the injury was worse than Brazil’s medical staff had initially feared. “He’s out of the competition,” David Luiz said. “He’s a great guy and now he’s out. Everyone feels sad.”

Maicon added: “We must give Neymar all our support. It is complicated now [for the team], at this stage of a World Cup.”

Jennifer Lopez kicked off the FIFA World Cup 2014 in style on Thursday, as she performed at the Opening Ceremony in Brazil.

The 44-year-old singer showed off her incredible figure in a sparkling leotard she sang the official FIFA song We Are One (Ole Ola) alongside rapper Pitbull and singer Claudia Leitte.

There had been initial reports that Jennifer was due to drop out, but by the looks of her energetic performance there was nothing that could have kept her away from the stage.

The song is the lead single from the World Cup album, and follows on from Shakira’s 2010 anthem Waka Waka.

The trio put on a spirited show as they jumped up and down on stage, swaying their arms and encouraging the screaming crowds to join in.

As they finished the song and walked around the stadium, Jennifer looked overcome with emotion and almost tearful as she mouthed ‘thank you’ to the crowds and touched her chest with her hand.

Neymar was the star of the show as Brazil came from behind to secure a hard-fought 3-1 victory over Croatia in the opening match of the FIFA World Cup™. The hosts’ star No10 equalised after Marcelo’s own-goal, and converted a second-half penalty after Fred had been fouled by Dejan Lovren.

Croatia had the ball in the net before the end of the game, but Ivica Olic was adjudged to have fouled Julio Cesar in the build-up, and Oscar made sure of the victory late on.

The opening goal of the 2014 World Cup was remarkable in itself, the first own-goal scored by a Brazilian in the history of the tournament. Ivica Olic received the ball on the Croatia left and ran unopposed into the Brazilian half. His low cross fizzed across goal and was turned in by Marcelo, who failed to readjust his feet in time. Ivan Perisic was ready to pounce if the Real Madrid man had not made the final touch.

The crowd were stunned, but they rallied behind their side, who were level before the half-hour mark. Oscar worked hard to regain possession for Brazil in the middle of the park, before passing the ball to Neymar. The Barça man skipped free of a Perisic challenge, steadied himself, and fired hard and low with his left foot across Pletikosa. The ball rebounded off the post, nestled into the back of the Croatia net and the Arena de Sao Paulo erupted.

The remainder of the first half saw Brazil dominate possession, with Croatia looking dangerous on the counter-attack.

After more Seleção pressure in the second-half, the hosts went ahead. The ball was played into the box towards Fred, who tried to swivel to hit it towards goal. He was impeded by Lovren and the referee pointed to the spot. Neymar stepped up, delayed his run-up, and hit hard to Pletikosa’s right-hand side. Croatia’s No1 got a hand to it, but could not stop it putting Brazil ahead.

Despite a valiant effort by Croatia, including their disallowed goal, Brazil wrapped up the three points when Oscar fired home from the edge of the box.