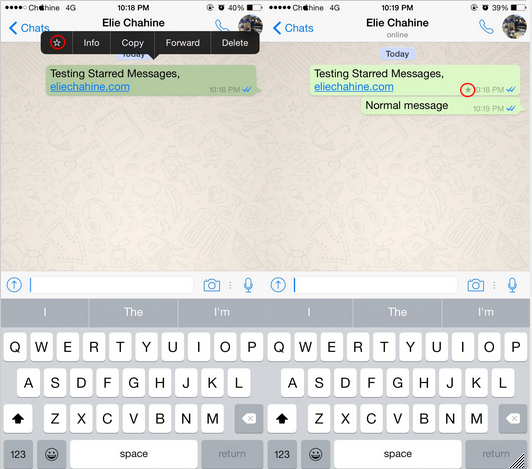 WhatsApp, the popular Facebook-owned messaging service, has started rolling out a new ‘Starred Messages’ feature for iOS users in the form of an app update. The feature aims to let users quickly access bookmarked messages including images, videos, or other content quickly.

WhatsApp users would now be able to ‘Star’ a message using tap and hold gesture. The message would then be saved in a separate new ‘Starred Messages’ tab. The feature is also available for WhatsApp Groups.

Starred Messages has been seeded to iOS users in the app version 2.12.7 and is likely to reach Androidand Windows Phone soon. The updated app is available to download form the App Store.

The more we rely on our smartphones for every facet of our lives, the more risk there is of losing important data if your phone gets lost, stolen or destroyed. Android already has some backup services built in, but the massively popular chat client WhatsApp has just announced a partnership with Google to make sure its 900 million users don’t lose anything important to them. Starting today, WhatsApp users on Android will have the option to back up their entire WhatsApp history right to Google Drive. The backup will include chat histories, voice messages, photos and video, and you’ll be able to restore all of that data to a new phone when you set up WhatsApp.

Unfortunately, as with many new Google features, this one will be coming by the ever-popular gradual rollout. This is a particularly long one — Google says the feature will become available over the next few months. Once it’s available, you’ll find the option in WhatsApp’s settings. Why it’ll take so long isn’t clear, so you’ll have to just start checking your app periodically if you want to take advantage of the new feature.

After one year of acquiring mobile messaging service WhatsApp, Facebook has begun testing a new feature in its ‘Facebook for Android’ app that includes the first major integration of WhatsApp.

The social networking site has added a ‘Send’ button with the familiar WhatsApp icon as a part of the status actions buttons that appear under each status update. 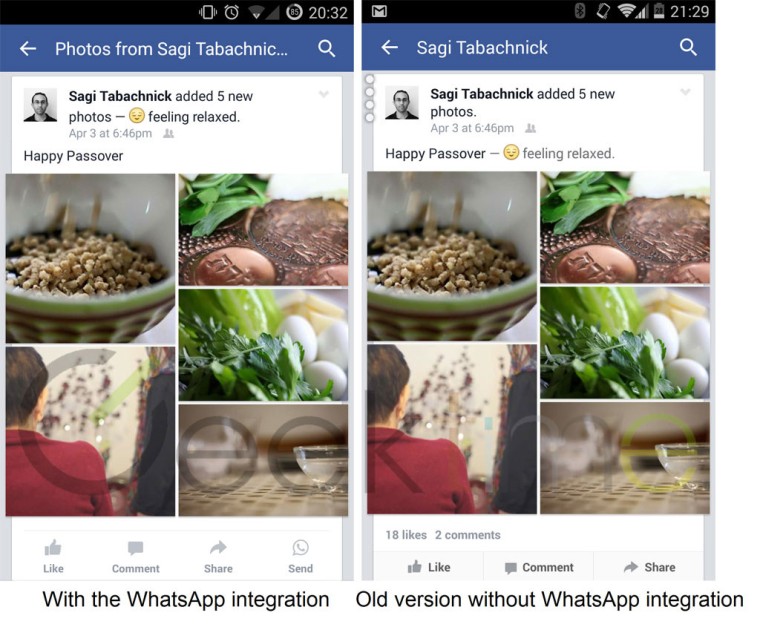 The new button appears on the right side (for left-to-right languages) for some users in the most recent version of the Facebook for Android app, the Geek Time reported.

This move appears to be the first step towards connecting the two platforms in order to sustain growth and take control of the messaging market together.

According to reports, teams are already working on a deeper integration that will include the ability to send messages between Facebook Messenger and WhatsApp. 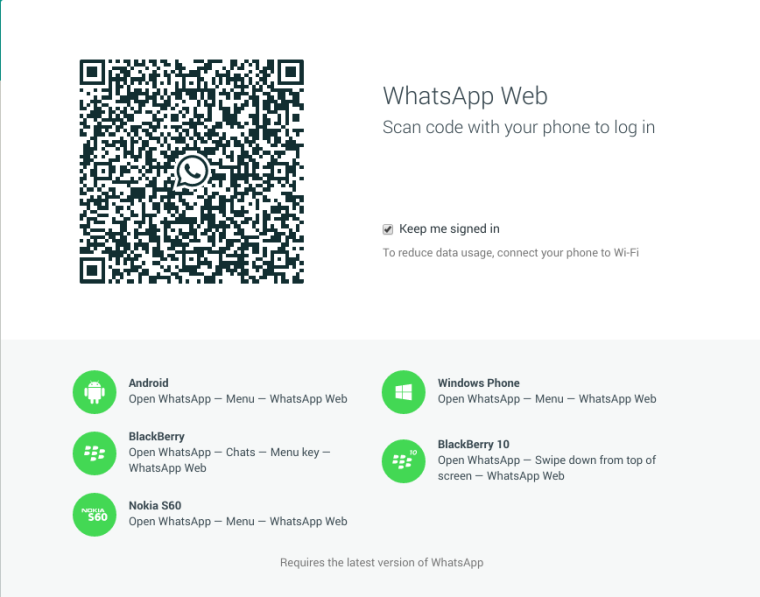 The much leaked Web interface for WhatsApp is now live. As you may have imagined, this allows you to use your computer to send and receive WhatsApp messages. But, true to this app’s very obvious “mobile first” mantra, the Web client is acting simply as an extension of your phone.

Thus, all the messages still actually live on your handset, they’re just shown to you on the Web as well. So your phone needs to be connected to the Internet while you’re using WhatsApp Web on your computer, keep that in mind.

To access the new functionality, you need to have the absolute latest version of WhatsApp for your platform installed on your mobile device. Then you can head to this address from your computer, where you’ll see a QR code. WhatsApp says you should use Chrome. Other browsers may work, but to be 100% sure you’ll need to go with Google’s offering for now.

The next step involves pairing the WhatsApp account on your phone to that computer. For this, you simply scan the QR code from within WhatsApp on your handset. This will be possible through a new Menu option, labeled WhatsApp Web.

Instructions for all mobile platforms are provided on the WhatsApp Web page. If you don’t have that option in the app on your mobile device yet, then either you’re not running the latest version or the company hasn’t enabled the new feature for your account. This seems to be a staged rollout of sorts, so if you’re in this situation a bit of patience will help.

WhatsApp Web is going to be available to you if you use the app on Android, BlackBerry, Windows Phone, or Nokia’s old S60 OS. Unfortunately the glaring omission in that list is iOS. WhatsApp says it can’t enable the Web client for people using iOS “due to Apple platform limitations”.

Popular instant messaging client WhatsApp has gone through a major UI redesign on Android. While the former version was nothing more than just a slight revision of the iOS app, the latest update takes advantage of the new Holo UI guidelines for Android.

Right off the bat you’ll be able to see that the menu bar on top is now flat and in line with the new UI guidelines. Drop into a conversation and you will find new flat message bubbles and a redesigned text input field. The emoticons have also been moved down and placed next to the text field, which makes them easier to access on smartphones with large displays. The Settings menu has also been redesigned. 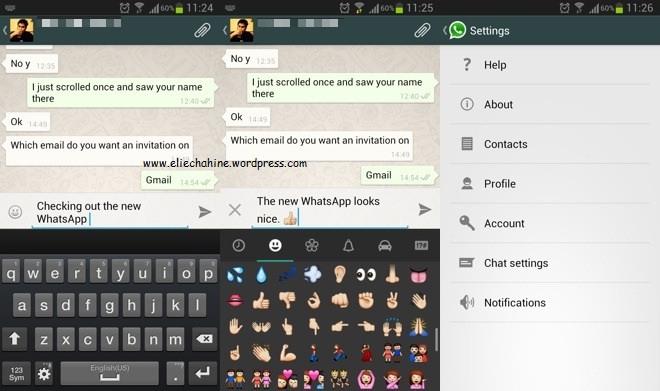 Unfortunately, the new version of the app is not yet available through the Play Store, and you will have to click on the link below to download the APK from WhatsApp website. You can safely update the app with the new one and maintain all your current app data. There is also no beta sign anywhere, so the app should be stable enough for everyday use (I haven’t faced any issues with it yet).

If you are on Android and use WhatsApp Messenger regularly, you should definitely give the new update a try.

WhatsApp hit the tech news circuit today because of a somewhat speculative article in TechCrunch asserting that Facebook has been sniffing around the mobile messaging company.

But the Facebook acquisition talks aren’t happening, said multiple sources. WhatsApp gave us the following statement: “The TechCrunch article is a rumor and not factually accurate. We have no further information to share at the moment.”

But that doesn’t mean WhatsApp isn’t worth talking about.

Here’s what is definitely true: WhatsApp is one of the largest mobile apps in the world, hands down. You thought Instagram was a massive independent mobile app before Facebook bought it? It’s not even close.

Facebook and Google have both been very interested in buying WhatsApp in the past, but the company is fiercely independent. (In fact, former Google corp dev guy Neeraj Arora became so intrigued by the company when Google was trying to buy it late last year, that he jumped ship and now runs business for WhatsApp.)

WhatsApp hasn’t released much in the way of numbers, but it is one of the biggest apps on just about every mobile platform out there.

For instance, it recently crossed the 100 million download milestone on Google Play. The only other non-Google apps with that many downloads are Skype, Facebook, Angry Birds and Flash. It’s the No. 1 paid app on iOS in more than 100 countries.

As of August, WhatsApp said it was sending and receiving as many as 10 billion messages per day.

Still, it’s not necessarily clear how WhatsApp will evolve — right now it is a very good substitute for paid text messaging from carriers, especially across international borders. It’s a fast, clean mobile app that doesn’t have any of the complications and annoyances of Web applications ported to phones. But messaging is all it does.

WhatsApp was founded by Koum and Brian Acton, after they both were in engineering roles at Yahoo for about a decade. The company is run by a small team in Mountain View — it was 30 people last time I checked.

On the money side, WhatsApp has significant funding from Sequoia Capital and is privately valued in the hundreds of millions of dollars. The company makes money by charging $0.99 for its iPhone app, while leaving other platforms free. It also has struck carrier deals in places like Hong Kong because it is such a popular motivation for mobile data usage.

But here’s the thing. WhatsApp is very different from Facebook or any other social network. First of all, it isn’t really a social network. Users connect their phone address books to find others on the service. There’s no notion of a password. If users delete the app or get a new phone, their contacts don’t carry over.

And second of all, WhatsApp is not supported by advertising — unlike Facebook, Google and almost everything on the Internet. “Advertising isn’t just the disruption of aesthetics, the insults to your intelligence and the interruption of your train of thought,” Koum wrote in a blog post this summer. “Remember, when advertising is involved you the user are the product.”

So sure, everybody has their price — but that’s a big fat not-for-sale sign to any Internet company acquirers.